Bouquets of Flowers from UC Davis on 8x10

Mother's day was coming up and my daughter Ella has been working on a farm at University of California Davis. Ella has been bringing home some wonderful bouquets - and once again she brought home a gorgeous arrangement for her mom.

Since getting a couple of reels from 20th Century Camera, I've been itching to shoot more 8x10 and 5x7 film. They have a reel that fits four 8x10 films that fits in my exiting JOBO drum. Since testing on a Unidrum roller, it looks like this reel is real good (punny?!)
My grandfather "Hal" (Milton or M Halberstadt) gave me an (even back then old) Burke & James 8x10 camera, and I broke that out along with a 12" Kodak Commercial Ektar to take one shot of the bouquet.

The exposure was 8 seconds wide open (f6.3) on Ilford FP4 Plus (outdated by a couple decades. The B and T settings weren't working on my Ilex Universal shutter, so I turned on the focus button that opens up the shutter after covering the lens with the darkslide and waiting a few seconds to avoid camera shake. Camera shake is a real issue with this kind of a setup, a long exposure with a wooden camera pointing down! I also had to factor in bellows extension to the exposure, since with 8x10 the image was almost life size on the ground glass.

So the resulting negative was a bit dense, but looked good. Here's a quick and dirty inversion from my mobile phone: 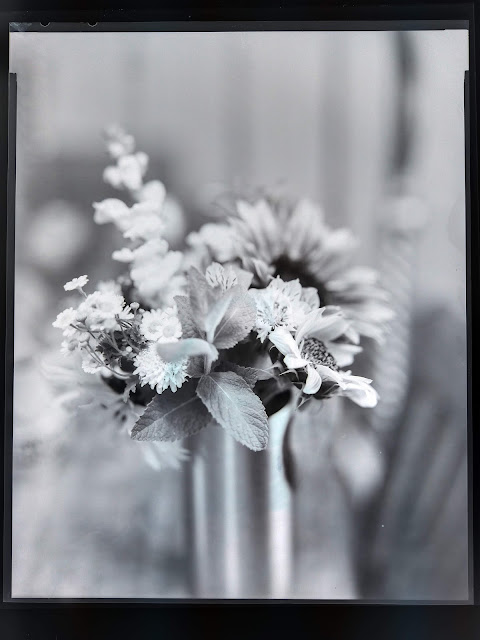