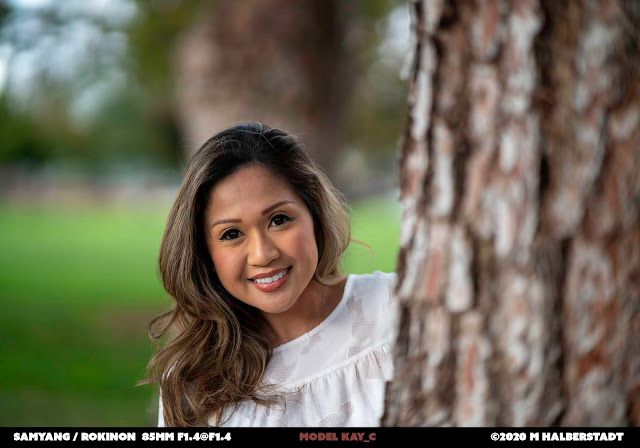 Nearing the end of the year, it was time to buy some new business related gear.For part of my work, shooting people with blurry backgrounds is an important ability. I already own a good 85mm lens for my Sony E-mount system: the Zeiss Batis 85mm f1.8. And I own the Sigma Art 135mm f1.8, one of my favorite lenses. Despite amazing optical performance, the Sigma is not only a bit long for some work but really big and heavy.


For a while I’d been eyeing a used Canon 85mm f1.2. There was a real deal on LensAuthority.com for a while that had minor scratches and a small filter ring dent. But I waited to long. Then I was contemplating the Sigma 85mm in Canon mount- so I could use for digital but also on my Canon film cameras.


One of the biggest benefits of Mirrorless photography is the face and eye focus functions. It’s now possible to get a high hit rate with a very shallow DOF. My first tests confirm that my new lens can do a good job of eye focus, and is very sharp and contrasty wide open (at least near the center of the frame.) So it seems this lens will do what I need of it.


“Bokeh” the defocused area of an image is subjective, but with a lens of this nature it can be an important consideration. Personally I do like the Samyang/Rokinon’s out of focus rendering. Like my Batis, it does get “cat eye” highlights the further from the center.


Another consideration that you might not find on another review…. I have an infrared converted Sony a5000. When I bought that camera, I had no idea that lens performance on IR cameras is a whole ‘nother bag. I was quite surprised to find that some of my best lenses on normal cameras were crap on the IR camera. For example, I have the Sigma Art 18-35mm. On a conventional APS-C camera it is flawless. That lens is sharp wide open (f1.8) from one end of the zoom to the other. On infrared, it’s soft on the edges, and displays a prominent hot spot in the center.


This Samyang appears to be a good choice for IR. It’s sharp edge to edge and displays no hotspot. Additionally this lens sports a 77mm filter ring size which allows use of all of my IR filters.


So why would one choose this Samyang over any of the other offerings?

June 15, 2017
Here's a sheet I got from writing ORWO Technischer Kundendienst back in the 1980's. It lists development times for all the ORWO Black and White films sold for export at the time (NP15, NP22, NP 27) combined with western developers Microphen, Atomal, Rodinal, Refinal, D-76, & ID-11. A little bit of ORWO history- Germany's big photo film/paper manufacturer up until Germany's losing WWII was AGFA (short for  A ktien G esellschaft F ür A nilinfabrikation - or corporation for some sort of plastic manufacture.) Germany was occupied by the winning powers USSR/USA/GB/FR and the rift between the USSR led to some complications for industries. Depending on your view of history the US and western allies were much friendlier to the land they occupied (remember the USSR lost many millions of their citizens to the NAZIs which made them much less tolerant.) In any case, some factories in the east moved to the west with many key employees. Most photo enthusiasts know of the t
Post a Comment
Read more