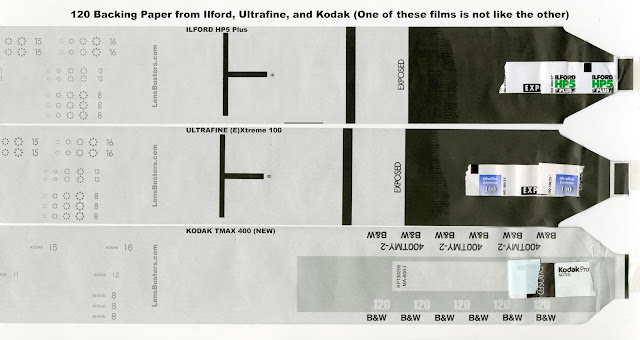 One of these 120 paper backings stands out as being different. Not a big surprise, since one is Kodak, and another is Ilford. But our mystery film Ultrafine has the *exact* same backing paper as seen in this scan. What does this mean?

There are a few possibilities that come to mind. It's always possible that the backing paper is made by a third party I suppose. Not likely, as there isn't much of a market for 120 film anymore, and I've never seen another non-Ilford film with the same backing paper. So is this mystery film, Ultrafine actually Ilford then? Another, more likely theory is that it is made by Kentmere. Kentmere and Ilford are both part of the Harman group. In researching this I just read that Harman was the name of the founder of Ilford company in the late 19th century.

So how is are the Ultrafine (E)Xtreme films? I bought a bulk roll of the 400 speed. Frankly it's pretty grainy and soft. I don't hate it, and I'm trying to work with the grain. After all, what's the point of film in the digital age? Especially 35mm?! It has some saving graces. The other film in this price point- Fomapan/Arista.edu has some major problems not shared with Ultrafine/Kentmere: super curly, very poor reciprocity failure characteristics, and high contrast/highlight blockups.

Unfortunately Ultrafine (E)Xtreme isn't available in sheet sizes. I plan to post some samples here as time goes on.