The "Sunny 16 Rule" and Analogue Photography

May 14, 2018
When I first started photographing, as a teenager in the early 1980's literally everybody used a film camera. All sorts of films, color and black and white could be purchased from convenience stores, drug stores, supermarkets, by mail order, or most likely at one of the ubiquitous One Hour Photo shops. You could get Disc film, 110, 127, 120, 220, and sheet film locally in San Jose where I grew up, as well as in most any city of a certain size.

For those of you just getting in to photography, you might find the notion of metering light for exposure difficult. Your iPhone's camera not only do a great job of metering and exposing, but you also have the advantage of being able to instantly see the results and correct if needed.

But in the century plus of history where film was king, there were a lot of tricks folks came up with to make exposure easy. Back in the 1980's there would typically be a small sheet of paper folded up in the film box with a bunch of information. Typically this sheet would have some variation of the "Sunny 16" rule, complete with a drawing.

A summary of this rule goes like this: you set your shutter speed to match the film speed (or as close as your shutter speed gets to it.) Then in normal, sunny daylight situations (not way up North in winter or anything, but where most of us live) set the aperture to f16. So if you were using an ISO 100 or 125 (or ASA as it was known back in my day) you'd set the shutter speed to 125/th and aperture to f16. It's almost fool-proof, especially if you're using negative films that typically have a lot of exposure latitude.

When the weather isn't sunny, the exposure table typically will have you open up the aperture and leave the shutter speed alone. 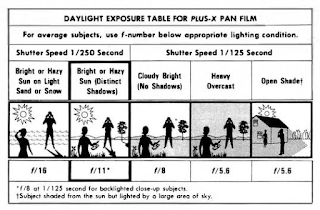 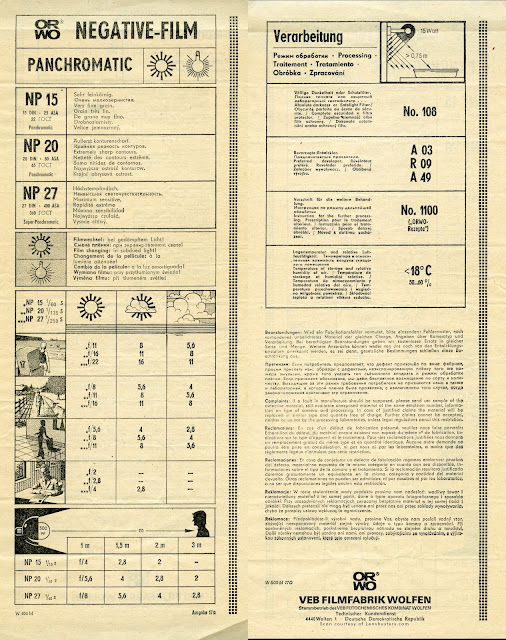 By the way, if you happen to find other film data sheets, I'd love to add them here. Please email me a link or scan.