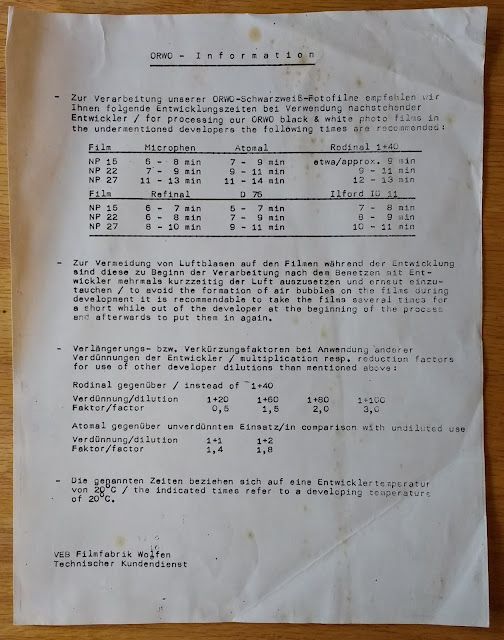 Here's a sheet I got from writing ORWO Technischer Kundendienst back in the 1980's. It lists development times for all the ORWO Black and White films sold for export at the time (NP15, NP22, NP 27) combined with western developers Microphen, Atomal, Rodinal, Refinal, D-76, & ID-11.

A little bit of ORWO history- Germany's big photo film/paper manufacturer up until Germany's losing WWII was AGFA (short for AktienGesellschaft Für Anilinfabrikation - or corporation for some sort of plastic manufacture.) Germany was occupied by the winning powers USSR/USA/GB/FR and the rift between the USSR led to some complications for industries.

Depending on your view of history the US and western allies were much friendlier to the land they occupied (remember the USSR lost many millions of their citizens to the NAZIs which made them much less tolerant.) In any case, some factories in the east moved to the west with many key employees. Most photo enthusiasts know of the two different Zeiss factories (Oberkochen/Jena.) Well AGFA moved west to Leverkusen and the remaining factory in Wolfen was renamed ORWO short for Original Wolfen.

The more astute readers may have noted the meaning of those ORWO film names. For those of you who didn't recognize it, the number associated with those ORWO films are their DIN speeds. Back in those days- before we used ISO to describe film sensitivity, here in the US we used ASA. ASA is short for American Standards Association, ISO stands for International Standards Organization, and DIN stands for Deutsche Industrie Norm or German Industrial Standards (or so...)

That's to say they are the same at ISO 12, and while ISO doubles, DIN adds 3.

Somewhere I have much more detailed papers from ORWO that I hope to post here when I find them in my copious piles of papers.