Trials and Tribulations of Tmax

Just having developed a roll of the T-Max 400 I had a bit of a surprise. The good part of the surprise was the new emulsion's tonality looked great when I pulled it from the hangar. But on closer inspection I was a bit concerned.

I thought I could see some modeling or splotchy pattern. I convinced myself it was because I was looking holding the lupe to a window and I must be wrong. But a quick scan on a Epson Perfection v750 scanner confirmed my fears.

I figured at first I must have done something wrong - perhaps my development technique was to blame?

But further examination led to a different conclusion.

The strange thing was that the most recent photos on the roll suffered from the blotchy pattern, not the photos taken months ago! Numbers from the paper backing were visible in some of the negatives in addition to the blotchiness. I knew that it wasn't a light leak, one of the two uses I had for the Mamiya setup was for long daylight exposures. I've been putting really dark neutral density filters on the taking lens and making multi-minute exposures in broad daylight.

Later I scanned a few negs I'd developed months ago. I hadn't looked closely at the TMX roll until now, So I don't recall how long the film sat in the camera partially exposed. But clearly there is a big problem here too- the letters Kodak are visible in the frame along with blotches. 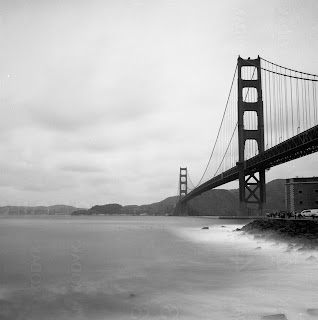